Having decided late last year to try and get out to a “proper” nature reserve once a month with the little ones (their words), today was to be our first outing of the year. Our destination: Rainham Marshes RSPB reserve. A very family friendly nature reserve on the outskirts of London; or in Essex depending on your view point.
As I’m sure I’ve made clear before we, Zoe and I, are non drivers. This means that any reserves we plan to visit need to be accessible by public transport. Rainham Marshes is definitely one of those.
Situated just a short walk away from Purfleet railway station, on the C2C line out from Fenchurch Street station, it was an ideal start for our family challenge.

Starting out from home we jumped on the bus to Milton Keynes Central train station where, with help of the lovely lady in the ticket office, we figured out the cheapest way to get to Purfleet: One day travel card and then tickets from Fenchurch st. We didn’t have long to wait for the train to Euston, and were soon flying down the tracks to the big smoke of London.
Arriving some 40 mins later we exited the train and headed straight for the underground. After 5 or 10 minutes trying to figure out the best way across the maze that is the London Underground, we were soon rattling through the dark tunnels, criss crossing the capital. Finally managing to reach Fenchurch street. We settled into the final leg and were soon arriving in brilliant sunshine at Purfleet.
It is only a short walk to the reserve. And we only had to back track once to collect the trousers of the teddy bear, bubs was carrying. We were soon walking the banks of the Thames; the multi coloured visitor centre looming large in front of us.

Entering the visitor centre we were greeted by two young and very enthusiastic volunteers, who were were happy to pass us tickets and information about the location of the current star birds; as well as introduce the kids to a great, fun, orienteering activity they could join on our walk.
Our arrival at the reserve coincided with lunchtime, so with two rather peckish kids we sat down for a cake or two rather than head straight out into the wilds. It’s not the cheapest of places for a snack and, in the little ladies words, “not enough choice” when it came to drinks, but that was our only gripe of the day.
It didn’t take long to wolf down the food and we were soon heading out into the marshes themselves.
I’m going to skirt over the Orienteering and stick to the birds. But suffice to say it was fun and a little testing.

Looking out over the ancient marshes is like looking back through time in some aspects. And the history of how they got to the state they are in now is not only a fascinating one, but one that the reserve is very proud to tell you about. Dotted all over are various boards with information, from the uses in WWII to the 1000 year old ant hills!
On my first scan the ducks were clearly the main focus. Scanning through the various pools and under the legs of the large cattle that roam the marshes, keeping the grasses low, were numerous whistling Wigeon and piping Teal. Lots of Shelduck and Shoveler; and quite a few Pintail with their chocolate brown heads standing our from their shining white chests.
As we watched we could see hundreds of Starling picking their way through the long grasses, accompanied by Redwing and the odd Fieldfare and then the stunning red head and black eye of a Green Woodpecker popped up, and he began to feed through the lush greenery.

As we walked through the woodland area of Rainham Marshes, the distant drumming of a Great-spotted woodpecker could occasionally be heard above the road and train noise. And as the woods turned into reeds the ear splitting song of a Cetti’s Warbler belted out from the reed beds. We heard good numbers of these skulking warblers throughout the reserve, sadly never spotting any. But how often is that the case with these reed dwelling songsters.
A break in the reeds has been set out as a feeding station and it was alive with small birds. Numerous Blue Tit and Great Tit kept flying in to visit; while the odd Reed Bunting could be seen picking around in the fallen detritus. Greenfinch and Chaffinch could often be seen in the surrounding bushes; and a few Collard Dove were resting in the higher trees.

Moving out of the reed beds, we were greeted by another stunning view out over the marshes. And while scanning through the Canada Geese and Mallards a female Stonechat popped up onto the fence in front of us. Giving us some wonderful views as we stood. Again this was the first of many, including one stunning male in full breeding plumage further around the Rainham Marshes reserve.
Further along still, a small group of birders was gathered. And once we approached we soon discovered they were watching a very well concealed Barn Owl that was roosting in the thick bushes we had not so long ago passed near to (not near enough to have seen). Managing to show the kids and Zoe we all had a look but were not overly impressed with the view, think white speck with branches in front of it. As nice as it is to see any owl this has to go down as my worst barn owl view.

Eventually we arrived at the first hide of our walk, while I can see the appeal of many hides there was very little outside this hide, a few teal, one or two mallards and three Common Snipe, that we were directed to by the rather loud local (I spend my whole time telling the kids to whisper and then full grown adults think it is OK to talk or shout about birds?). We didn’t stay for long.
Leaving the hide we slowly made our way through the tall reed beds. The loud songs of Cetti’s warblers echoing out under the buzz of the over head electricity pylons. We stopped every so often, at the little platforms built to look out over the marshes, to check through the ducks and geese noting more Shelduck, lots of Lapwing, and a few Pochard, Tufted Duck and Gadwall.
Every so often large flocks of waders would take to the skies. Mainly huge Lapwing flocks but intermingled were the occasional smaller flock of the much more delicate looking Golden Plover, there may have been others, but I could not identify at distance.

As we approached the Shooting Butts Hide (and yes the kids and Zoe thought this was a hilarious name, but not as funny as Butt scrape!) we looked out over Wennington Marsh (I sound like an expert now) and amongst the regular ducks were a few Common Gull and a lone Lesser Black Backed Gull. Several Linnet and Goldfinch were picking their way through the short grass.
Entering the hide I was very impressed by the building. There is great access for this high hide including a wheelchair lift (the first I have seen at a nature reserve), and rather than the old fashioned wooden opening slats there are some great, large, glass windows with a pulley mechanism to open and close (the top half opens out the bottom scrolls down. It is a large spacious hide as well, room for plenty of birders to all get great views.
As we sat down to scan through, Tubs spotted a small bird fly in to land on the near by muddy islands. Closer examination showed it to be a cracking Water Pipit, the first I have seen for a few years now. It pecked its way about the island for a few minutes before flying off across the reserve.

After only finding more of the usual suspects from the Shooting Butts hide we headed off in search of more birds (and for some a toilet). And it was while waiting outside of the toilet I spotted very distantly a Short Eared Owl flying above the hills over looking the River Thames, these distant views were all we managed for the day sadly as the time it would have taken us to get there would have meant it being dark by the time we got there.
Moving on from the toilet block we approached a a series of large wooden numbers, left over from when this was an MOD target range I believe, and perched atop the number 8 was a lovely Kestrel, he gave us some great views, flying from the eight to land on the now broken four where I managed a photo.

By now the day was beginning to draw to a close and we still had to find a few clues for the orienteering so we began to walk the final stages of the reserve, beside the high seawall. As we walked we were treated to some very close views of Coot in the little ditches that run alongside the paths.
Suddenly a commotion broke out over the marshes and the skies filled with various ducks and waders, scanning through these flocks it wasn’t long before I picked up the reason for this flight of birds, a Peregrine was busy hunting through the pack. I watched for several minutes trying to get Tubby onto the bird (and failing) and then I realised he sees plenty of them when he goes to watch the MK Dons (a pair nested in the stadium last year and treated the fans to views at most games).
At the second to last orienteering clue while the kids were busy pretending to be ants I was checking the birds of the reserves and as one of the local crows turned, I realised the diamond shaped tail was that of a Raven and in fact the two crows I was watching harry a jackdaw were in fact Ravens harrying a Crow! As it turns out the Raven was my 100th bird of the year (so far) not a bad number for one who doesn’t drive and mainly works a local patch only.

Our last stop was at the Purfleet hide, another cracking hide with loads of space and some great views, sadly dusk was beginning and not much was on show apart from more local Shoveler, and it wasn’t long before the volunteers came by to chivy us along as they were locking the hides.
We made our way back to the visitor centre; handed in our orienteering results (we got all but one clue right and had guessed the word correctly); and recieved our prize (some great stickers for the kids). We left the reserve as the sun began to fully set across the river. Turning the grey of the River Thames into a burning orange, as she dipped below the distant horizon. The end of or first Rainham Marshes visit, but surely not our last.
Reversing our rail journeys we were soon back home tired but happy after a very enjoyable day out.

Just a few last shots of the kids and Zoe while orienteering:

Making a winter visit was great but a summer one can’t be too far off (Update: We visited for Hen Harrier Day later in the year)

Did you enjoy Rainham Marshes RSPB Visit? or Find it useful? Then please consider sharing with your friends via the links below. 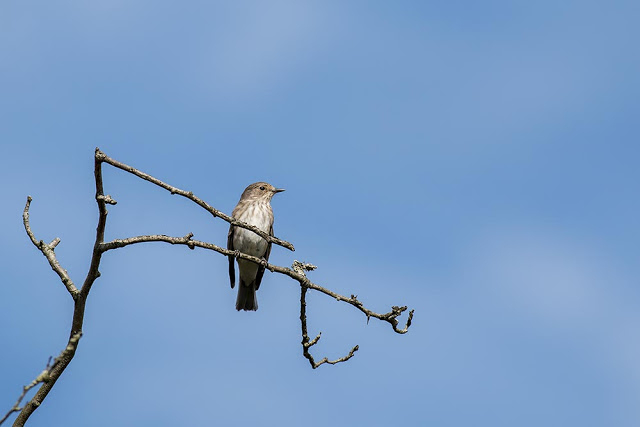 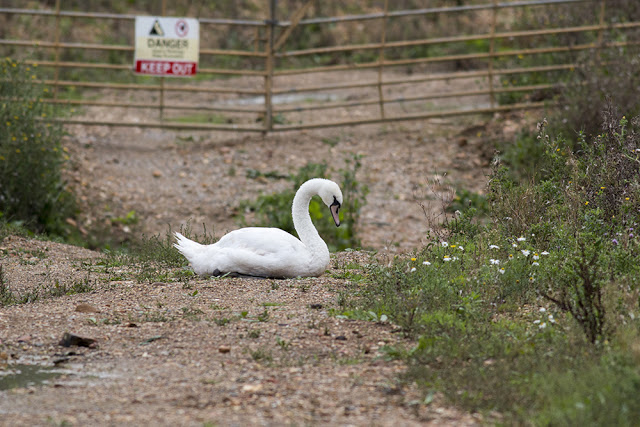 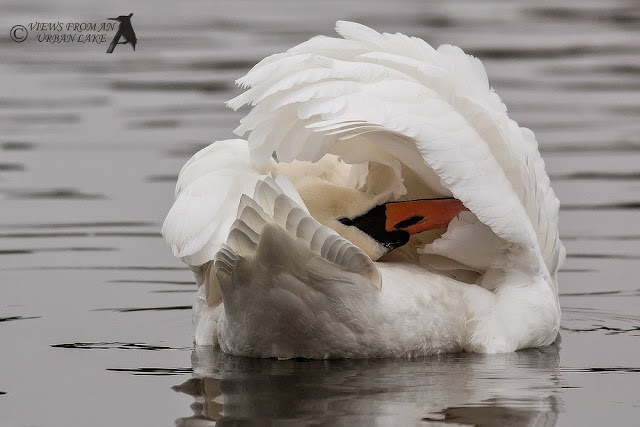 A Grey Day at Willen Lake