Stepping through the wooden five bar gate into the small, enclosed, field. A field that in the spring months teems with chimney sweeper moths in the long grass. I was greeted by a small party of Long-Tailed Tits as they nosily made their way along the surrounding hedge. Their presence always a welcome sight on a cold winters day. First signs of Winter movements.

Passing the lone, giant, tree that stands sentinel in the heart of the paddock. The call of an over-flying finch stopped me in my tracks. It was not one of the local Chaffinch or Goldfinch that I could see feeding vigorously on the seed heads in the corner of the meadow. The more metallic, zitting almost, tone to the call was clearly that of a Redpoll. Yet again, sadly, just passing through the patch. The clear, crisp, blue skies being ideal for moving through. Signs of Winter Movements.

As I neared the heavily swollen Ouse, an almost ghostly, brilliant white, flash caught my eye as a Little Egret leapt up from the waters edge, obviously startled by my less than stealthy approach, and made its way up stream, its flight path reflected in the, near copper coloured, river waters, now running high and muddy due to the recent, heavy, rains.

Heading in the opposite direction, myself, I startled a Redwing or two as I passed some of the smaller bushes across the river, the nervy birds taking to flight with a whispy whistle. I then spotted their much larger cousin, a Fieldfare, perched on what appeared to be a bare bush just across the flowing water. Slowing my approach I calmly, carefully edged closer, until I was stood opposite the bird staring at the beautiful orange, grey and brown plumage of this winter thrush as it began to feed on the deep red berries of the spiky bush it was resting on.

After the brief sojourn with the winter thrushes I carried on tracing the path of the river, following its meandering path as it swiftly carried the detritus of the recent storms and strong winds on its Eastern journey. Several Moorhen were attempting to ride the fast moving currents, while trying to avoid the reeds that had been dislodged by the powerful flow, and getting caught in the swirling eddy’s forming at various points along rivers path. Crow, Rook and Jackdaw could be seen fighting through the wind as they attempted to continue their daily hunts for morsels of food, while distant Black Headed Gull could be seen hawking over the far fields, brown and muddy from recent ploughing.

A second Little Egret could be seen, still and silent in amongst the brown reeds, as it put all its concentration into spotting a small fish or too in the dark, cold waters rushing between its legs. Thankfully I was able to capture a swift photo or two before the inevitable passing dog walkers disturbed its presence and it too leapt into the air and headed up stream, this time flying low over the green fields of the opposite bank.

Passing under the iron trunk aqueduct, through the low, dark, cattle creep the movement of winter thrushes started to grow. Flock after flock of Fieldfare flew overhead, their chacking flight call sounding harsh when compared to the more timid call of the accompanying Redwing. Their more sedentary cousin the Blackbird could be heard issuing alarm calls from multiple directions. Screaming a warning of some unseen foe or their own shadow as often seems to be the case with these birds. Wrens, Robins and Dunnock were singing from all corners. Often belting out their beautiful winter versions of their summer melodies from deep within the bushes, hidden from sight but easy to locate.

Another passing tit flock could be heard above, and all around, me as I approached the small board-walk. The Long-tailed Tits trilling calls ringing out from the high branches of the Alders; Great Tit and Blue Tit flitting about through the branches, either leading the way of the flock or following but rarely mixing in with their long tailed cousins. A shriller, longer call, could also be heard mixing in with the flock.

And then the brown, unmistakable shape of a Treecreeper flew out from behind one of the tall trees. Alighting over the river on a fallen beast of a tree, quickly working its way along the decaying bark in search of a hidden grub.

Two small Goldcrests briefly popped up in the heart of the flock before also disappearing off over the river and deep into the undergrowth.

As I stood looking out across the river and into the camp site lake, my binoculars raised as I scanned through the flocks of Coot and Tufted duck; in order to pick out the odd Pochard (who seem to prefer these lakes); and Gadwall hidden in among the more numerous species. A loud bang echoed across the lakes. Its source was hidden to me as the sound came from all around at once (or so it seemed).

The noise clearly had the desired effect as ducks and other water birds from all around took to the air. Small flocks of Common Teal and Shoveler came up from the Manor Farm pits behind me; groups of Mallard and Gadwall shot into the skies from the camp site lakes; the local Cormorants, who had been drying their wings on skeletal dead trees, were frightened onto the open water, where they began to frantically search the skies for the threat; even one of the Mute Swans (albeit one of this years birds) could be heard calling, its almost owl like alarm from the inlets of the pits.

After leaving the flighty ducks of the Western end behind I carried on East. And as I neared the millennium bridge two further loud cracks, of the bird scarer, boomed off from the fields north, towards the old water tower. The noise sending the birds of the East end pits into the air this time.

Clouds of Wigeon and Lapwing filled the skies. The former’s eerie, whistling calls echoing around the river valley. A sound as synonymous with winter water bodies, as the chiffchaff is to summer days. Another of the Winter Movements.

A brief scan across the lakes as the birds began to settle revealed a lone female Goosander, swimming rapidly away from the noise. Walking round to get a full view of the lakes and I could not relocate her, whether she had been frightened off by the yellow jacketed workmen or simply hunkered down against a bank somewhere I do not know.

I decided to make a return journey back up river, rather than head around and across the open fields below the farm buildings. And so turning back West, as seems to always be the case, the pair of Stonechats popped up. Why they always appear on my return walk and not as I pass the first time I will never know; perhaps I am just looking harder. But as I approached the lone bench, between the bridge and the paths corner, they duly hopped up onto the wire fence and gave me and a passing elderly lady an opportunity to have a prolonged view of the attractive pair.

As I moved off from the chats, the clouds started to cover the sky. The small fluffy white clouds transforming into a complete blanket of greys and whites; the rich blue winter sky now replaced with a dark sheet. Walking back up river the movement of winter thrushes continued to gather pace. But little else caught the imagination, until I had passed back under the canal.

Once back on the western side of the Grand Union Canal, as I rested for a moment on the set of U shaped benches by the pump house, a small flock of Redwings alighted in one of the Blackthorn stood beside the river. I grabbed up my camera and attempted to creep closer. Just as I was getting near enough to photograph these smart looking thrush; a local dog walker appeared across the fields, and they were off into the copse beside the river.

Cutting my losses I headed across the same fields and home.

Did you enjoy Winter Movements? Or find it useful? The please share with your friends, via the links below. 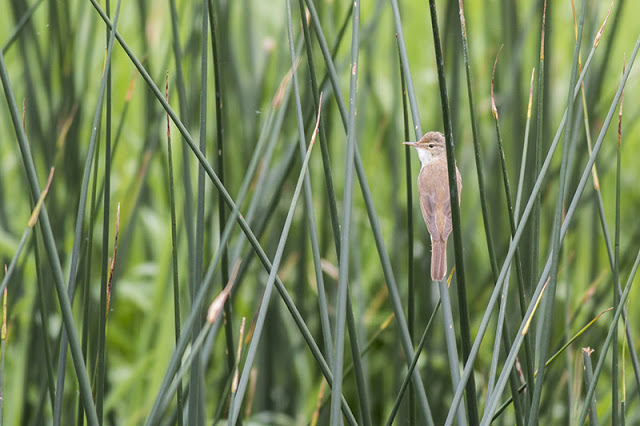 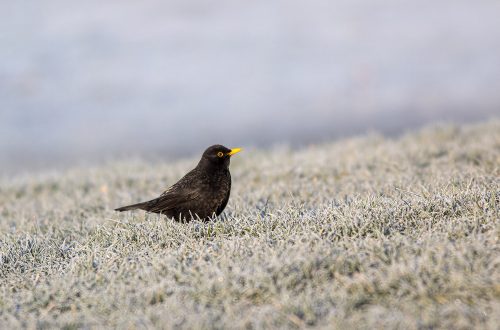 Frost and Ice in the Ouse Valley 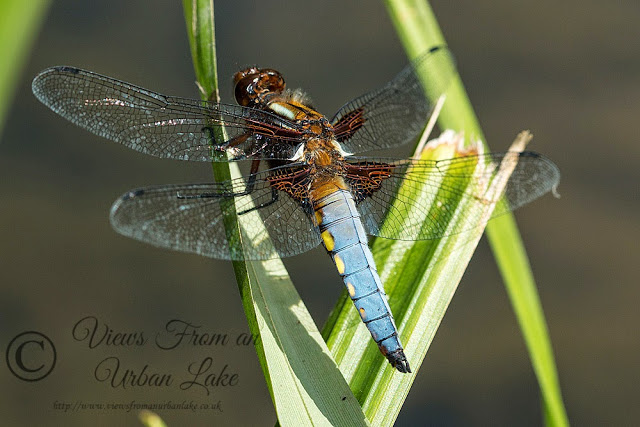